On 7 May 2008, I hosted the hash from my little house in McLean for the first time (first time at the house, you understand; not first time hosting).  It was about a week after I'd moved in to the house, and there was some confusion about finding a corkscrew.  Otherwise, all was well -- as I recall, I even had the necessary baking utensils to offer oatmeal cookies hot from the oven.  Today I hosted the hash from the little McLean house for the last time, again with decorative cardboard boxes strewn about the place.  Oh, woe and sadness, though you wouldn't think so from the weather.  Given a desire to empty a few cupboards and the late-December date, I'd planned a hot chocolate stop, which proved entirely unnecessary under sunny skies and temps in the 50s.  Gracious, it was lovely, and almost everyone at the On In stayed On Outside.  Bonus points.

A few other bonuses:  Robin came back to the hash, albeit just because she knew I needed help with egg-scrambling.  Blazing Straddle showed up with a cane and walked over a mile despite her recent knee surgery.  Packing Pink Heat showed up with one foot in a post-surgery boot.  I set both eagle and turkey trails; the turkeys had seven water crossings, not including the five with bridges of some sort; the eagles had nine, plus three bridges.  (There were a few dampened tootsies, according to report, but no drownings.)  Jeffy Lube, the eagliest eagle, ran just over eight miles.  The hot chocolate stop included rum and amaretto and cookies.  Paddle My Candee Ass had a birthday, and Big Balls on Deck provided a cake liberally bedewed with amaretto (there it is again) and bedecked with cream.  ("This is disgusting!" exclaimed one hasher, gobbling it down.  "It's all hooch and butterfat!")  BC3 thought Rough Cut looked like crap, and he never looks bad after a run.  Jeffy Lube declared the trail, "perfect" -- but he's got issues.  Someone else said the eggs were perfect; thanks again and again, Robin!  And then...


Hang on. First, the trails:  all the walkers decided on the two-mile, sidewalk, out-and-back that includes the garden tour at St. Dunstan's.  Most of the runners chose the roughly four-mile turkey trail.  Under threat of burnt offerings, several decided to eagle, which gave them a bit less than six (of true trail, anyway).  Then, the food:  brunch = bagels, salmon, scrambled eggs and mimosas, although enough people drank beer that there was only one left.  Warm cookies; birthday cake.  Mufti on roll; Lori hit 88, the double eights, ooooh.

And then... about 15 minutes after the last hashers departed, the doorbell rang.  Double Breasted Booby and Rick were on the stoop!  They had raced down from Long Island hoping for a few minutes of hash time, but got hard ciders and a short visit with just me instead.  Zipperhead phoned while they were there and said he'd just realized the hash was at 11:00, not 3:00, and had turned around and gone back home.  So silly.

I don't usually get many photos when I host, but the ones I did get are right here.

Happy Solstice, everyone!  That would be winter solstice, despite the shorts and t-shirts abounding at today's Heat Miser Hash.  Heater Beater and Easy Strider weren't certain how many folks would make the loooong drive (50 minutes from McLean; what are you Great Falls-ers complaining about?) out to the newly-opened Hamilton House, but between 70+ degrees, the festive Spirit of the Season, and, one suspects, affection for our hosts, something like 40 people made the trek.  Many arrived on the early side, and wandered the House marveling at the excellence of HB's design and ES's execution of a textbook rehabilitation.


Then they gathered out front, and learned about the turkey trail and the eagle trail and the possibility of a pit stop, and then they streamed cheerily into the street, walkers staying behind.  Those walkers got succinct instructions (four judicious lefts, essentially, would take them through the scenic village and bring them back to the House) and strolled away.  A rough split of the crowd:  maybe ten walkers, six eagles, 17 turkeys and four host-y types.  Easy Strider drove off with a case of water in the trunk, apparently in an excess of guilt over his eagle trail (Jeffy Lube:  "It was gravel road up, and then gravel road down."), and was past starting to get nervous before he found his eaglets.  They were mostly not in need of water -- it was warm, not hot -- but appreciated the thoughtfulness.  Meanwhile, the turkeys were most of the way home, and ES almost had to run them over before managing to offer water.  Richard:  "Where's the beer?"


The beer, of course, was back at the On In, in the refrigerator, which made for a very crowded kitchen at times.  There was also Provencal vegetable soup, from BC3's recipe, and butternut squash soup, ham and cheese and freshly-baked bread still warm from the oven.  Blow in the Hole provided big butterscotch oatmeal cookies for afters, and I shan't tell (without financial inducement) who ate four, maybe more.

Mufti called the roll as per, and Judy got cheers for her first run, and a polite, understanding nod for the news that she birthed Greg.  Not your fault, that collective nod said clearly.  And anyway, he married well.  The big guy -- retired Navy pilot, Warrenton resident -- you know him -- seems to have gotten yet another new name for his 200th.  Once I've figured out what on earth was happening, I'll update this post.  UPDATE:  "he just took advantage of the opportunity to tease me about multiple names when he gave me the engraved cup."  Before leaving, reluctantly, the Mufti led the group in a spirited rendition of 'Jingle Bells,' which he claims is a GFH3 Christmas tradition.  And maybe it is.  You can see him conducting his choir in the pictures here.

Zipperhead reminisced, somewhere around mile three, that today's weather was very like that of his first hash, some 28 years ago, or was it more?  Brow furrowed, he set off jogging again, and so we learn no more, for now, of that historic event.  It is not surprising to those who know and love this hash that he would have kept showing up, but for anyone else...  It was sleety and slushy and chilly and rainy and slippery by 3:00pm, though the Mufti and Phoenix Rising set out to set whilst the worst of the weather was still waiting behind the cloud cover.  PhR, of course, would have set an eagle trail and 40 miles of false trail regardless of weather, or the Mufti's protestations.

There were about 25 of the true faithful gathered under uncertain skies for the brief, and only five of those were walkers.  The runners ran off toward the lake, and a few moments later, the walkers followed.  And then the rain started again.  PhR got into his van and drove away to skulk near a particularly devious backcheck, where he enjoyed the discomfiture of FRBs Easy Strider (that's right; 50+ and riddled with Lime disease, and he's an FRB) and Jeffy Lube.  As best I can tell, the run was mostly paved, with true trail of about four miles.  It was about three miles in that Zipperhead started his reminiscences referenced above, as the heavens piddled and moped and spat and shoved slushballs down the backs of people's necks.

At the turkey/eagle split, the pack divided about evenly, with the promise of turkey soup luring ten or twelve onto the shorter route.  No eagle soup awaited the tough guys, but Blow in the Hole had lots of fun finishing as Eagle FRB.  Incidentally, Lori deemed that turkey soup 'perfect,' which is unsurprising to those who've had BC3's cooking before, and it was supplemented by fresh-from-the-oven cheese-melts built on pesto and tomato covered garlic toast.  Man, were they good.  And rich.  Really, how the crowd managed to stuff in almost the full platter of sweet breads, brownies and cookies is a mystery.  Black Box wine and Face Plant beer also proved popular.

But nothing is more popular than Mufti's roll call!  And this week's was a doozy, as, for the first time in the history of the hash, he missed someone; to wit:  the man formerly known as Cockpit... oh, why go on?  Anyway, celebrating a 200th with near-misses, the Mufti mentioned Ugly, But... (best name ever!), Massive Surveillance Ball, Grab My Joystick and other nonsense, and then recounted a sordid story of post-Exec Comm skullduggery, and then revealed the new name:  Big Balls on Deck.  Then there was a confusing bit with Flowerkraut objecting, and some lackluster attempt at re-voting, and then we were done.  As BBoD says, "It's a step -- a small step."


Next week:  Hamilton, and worth the trip!  All virgin territory.  And the week after that, 11am at my house for the last time.  Oh, sadness.  This week:  pictures right here.
Posted by Cork Me at 9:33 PM 1 comment:

Djamiss me?  I missed you, up until the moment I stepped out of the car in Leesburg this afternoon and thought, '[Expletive delete] it, it is [expletive deleting] cold.'  As the Mufti more eloquently phrased it, "This is the coldest forty degrees can get."  Something about the humidity, the light breeze and the overcast skies combined to make the day feel unseasonably chilly.

But that's not the important part!  What really matters is that 29 hashers took advantage of light traffic to tootle out to the historic village for another Rough Cut party.  RC set trail by himself, having forgotten to get back to any of the several volunteers for co-hare.  Arguably a pity, as somewhere around the fourth mile the pack got terminally confused and short cut their way back to the On In, except for Mini Schlonga, Paddle My Candee Ass and the soon-to-be-renamed (could never be soon enough for him) Cockpit Ejeculator. 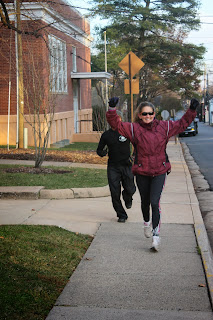 Valiant took a few walkers, and one stroller (heh heh) to check out big trees, whilst Moaner and others chose to meander the quaint downtown streets, festively be-decked for the season.  No one stayed out too long, though -- you could sense the pizza from a mile away.  Rough Cut also provided his standard buffet of chips and trail mix, plus holiday-type cookies for dessert, augmenting Lezley's birthday cake. 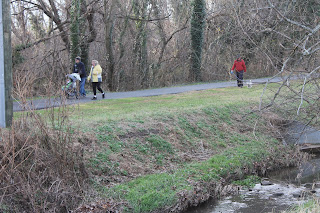 Mufti's cheery roll call failed to count Mango, Piper and Nathan, but caught the Naughty Nurse and Gene Pool Zombie, demoted months ago to the B list.  Suck Squeeze Bang, desperate to reach 300 and a new name, showed up in a wheelchair; the Executive Committee celebrated Cockpit E's 199th with a meeting; and we finally got to meet Jen Rough Cut, who stopped coming years ago due to the 'wild' nature of our group.  That would be many years ago.  Many, many years ago.

Being otherwise occupied at the time, I failed to get a good photo of Jeffy Lube hitting me, but there are lots of other pictures here.
Posted by Cork Me at 9:28 PM No comments: