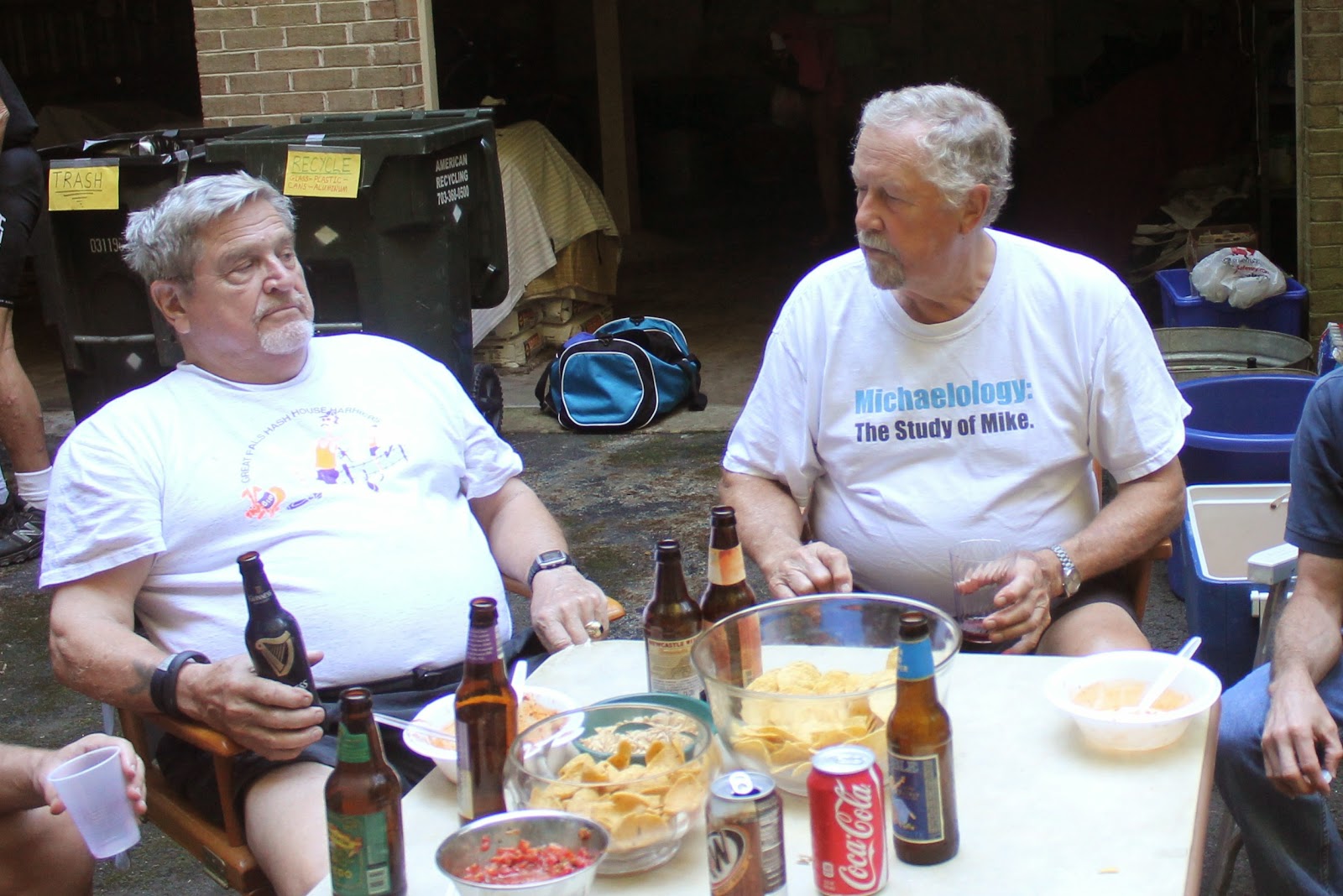 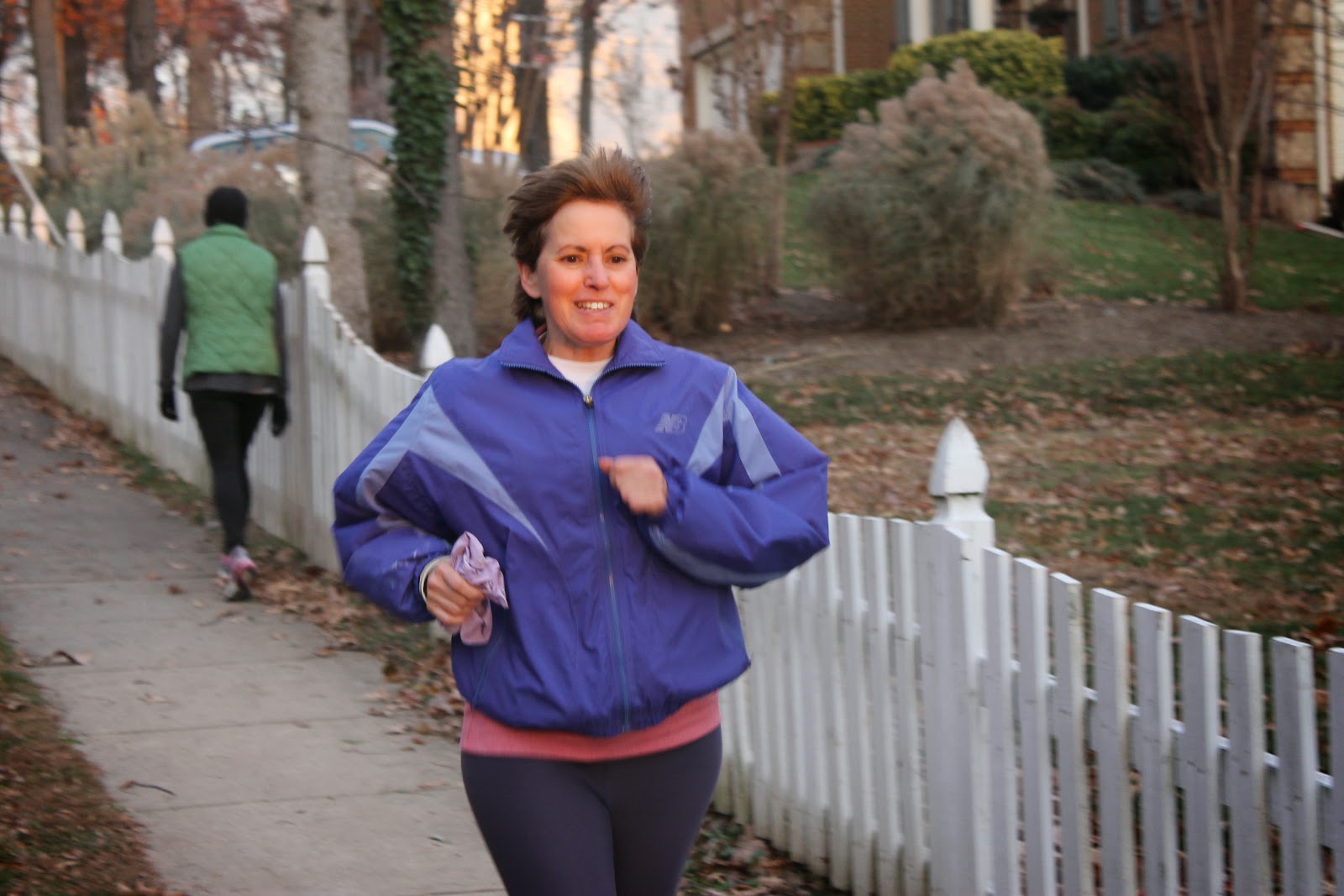 Per a reliable informant:  "We had 26 in attendance, only 6 of whom did not check the time and thus showed up at 3pm instead of 2pm.  Weather very kind.  Run standard Great Falls set by the intrepid Strac and the more-than-intrepid Dances with Bulls.  They found Gurr Hill at the top and took everyone down to the river on their backsides.  Leaders came in at 50 minutes, shades of Hashes of old, and most heartwarming, the leader was Easy Strider -- after over two years of struggle with Lyme disease, the old energy and drive was in evidence."
Posted by Cork Me at 6:59 PM No comments:

We are all thankful for hash heroes and frequent hosts -- especially, somehow, on holidays when they have other things they need to be doing -- Packing Pink Heat and Pickled Peter.

Saturday heroics from Ole Fud, Strac and Dances with Bulls AT 2:00 PM!!

With a warming trend on its way and the sun shining high from a blue, blue sky, 41 hashers convened on Blazing Straddle's house, where she was putting the final touches on chili for 35.  Whoops.  Anyway, she and Money Bitch had put all kinds of touches on a long, woodsy trail; some controversy arising over the possible existence of 'false checks,' and a rumor making the rounds that true trail was 7.9 miles.  That rumor was countered by physical evidence, but you know how it goes with rumors.

Most of the GFH3 knows the neighborhood pretty well, BStrad being a generous and frequent hostess to the group, so people who wanted to shortcut could.  One small contingent of walkers, new to the area, claimed to have gotten pretty seriously lost and walked a skosh further than desired, but they were still smiling at the 60-minute mark, so good weather and great company were apparently offsetting the impact of bruising tootsies.  The true-trail runners spent more than 90 minutes in the fresh air, and looked mighty fine as they pounded down the final hill, bright-eyed and rosy-cheeked, and Air Horn hardly wincing at all.


The final days of autumn make chili and fixins a natural choice, and the hash filled up, to the point that BStrad had to break out some noodles and tomato sauce for the handful who didn't make it to the stew pot in time.  There was also a delicious coleslaw, with raisins and almonds, and warm brownies making the rounds.  The beer was confusingly housed inside -- but trust this group to find the beer when it gets relocated.


The Oral Advocate warned the Exec Comm that Mufti and BC3 plan to abandon us for the questionable joys of southern California (warm weather, sunshine -- who needs that?) for three months beginning just after Christmas.  They promise to return, if everyone behaves.  After all, who wouldn't want to come back to all this?
Posted by Cork Me at 2:21 PM No comments:

Days do not get any more gorgeous than this, with the blue blue autumn sky offering the perfect backdrop for the last of the autumn leaves and their blazingly warm colors, and the sunshine sparking off Rock Creek as it splashed over its stony bed, and the traffic light enough that the gurgle of the water was the main soundtrack for a walk in the woods.  Days do get warmer than this, of course (record lows overnight in Danville!), but as long as they were in the sunlight or in motion, the 17 hashers who made it all the way to Washington were happy as could be.

Wait, wait -- they might have been even happier if they could have found true trail!  Though Dances with Bulls claimed in her brief that the run might be a bit long "because I can't count," she later confessed that she wanted to be sure the hash got to visit an especially beautiful spot in the neighborhood.  But they didn't!  Instead, they got up to Connecticut Avenue, ran through an X instead of exploring across the street a bit, rushed around the zoo, and somehow found the last bit of the trail, though opting for the 'strenuous' portion of the Western Ridge instead of the 'moderate' track DwB, Zipperhead and Paint in the Ass had carefully marked with highly visible, floury ons.  (Per Zipperhead, if you're not alpha, you're furniture -- and the trail was set by two alphas and a sofa.)

That, though, was just the initial clump of five runners.  Sally and Richard arrived a bit late to a new-to-them venue, and left about 30 minutes after the pack.  Sally ran much of the true trail, albeit cutting out some of the beginning and running the middle bit backward, carefully marking the checks somehow to indicate the forward direction.  This part seems very confusing.  Richard was the only runner to complete the full trail, and arrived at the On In about 90 minutes after everyone else, thanking his wife sincerely for those marked checks.


The walkers were cool, calm and in control, making a two-mile circuit past the zoo gates.  The On In featured good wines and great sandwiches and a roaring fire under the pavilion.  Sunshine plus a fire!  Plus the Mufti in fine voice.  Matt celebrated his final single-digit run, and A-lister Katy turned 20.  Photos here; thanks Mufti for pix!
Posted by Cork Me at 9:21 PM 2 comments:

In the midst of the new construction, golf courses and townhouse developments of Ashburn there is a farm or two still, and there is a bit of unpaved road with a 19th-century farmhouse that Little Ricky Tutu and his bride (about three years, for those of you who may have missed that development) are renovating.  Kindly, they shared it with the hash today, with Bad Dog assisting on trail.  The 27 hashers foregathered admired the work done and the plans for the future, listened respectfully to promises of a friendly trail for all ages and activity levels, then ran off into the mud of the nearest construction site.

They found about five miles -- two and a half for the four walkers -- of mixed pavement and grass; pipeline and W&OD.  Along the way, Climax Investigator came up with several ideas for nicknames:  Rubs One Out for Seth, who was fixing chalk marks along the way; Little Pokey Things for Brogue Bait, who was irked by the sticktights clinging to her extremities; Jack Rabbit, Sticky Palm and Go Long for others for other reasons.  Go Long presumably has something to do with the football that was, per Bite Me (eyes rolling), in constant play throughout the run.

The 19 runners made it back in four clumps (fast, faster, super-fast and shortcutters) and settled down to sausage (LRT:  "Regular or spicy?"), burgers and dogs and trimmings, bedewed by Sam Adams and Sierra Nevada amongst others.  As the crisp and sunny afternoon ceded to a chilly and sunset-y evening, hoods were pulled up and coats pulled on and blankets pulled over the coats and hoods, and the Mufti started shouting.  He was moving along as briskly as the weather through that roll call until he got down into the S's, when he suddenly flinched, bellowed a warning, and announced Spurt has achieved 666.  Then he dug into the B list for Pumpmaster, whilst Air Horn sadly pondered what he had done wrong.  To rear a B-lister:  oh, the ignominy.

During a conversation about Radar's photographic perspective and the plaudits it wins from half our membership, Bite Me confessed, "I can't find most of my costumes."  Non-Radar (sorry, guys) pictures here.  Great hash!

NEXT WEEK:  NOON START in Rock Creek Park.
Posted by Cork Me at 11:44 PM No comments:

The day after Hallowe'en; the first day of National Novel Writing Month.  There must be stories...