Rumor has it... there were about 35 people at Nipples and Greg's place in spite of the early start and missing website.  The course was short at about 4¼ true trail for Eagles and 3½ for Turkeys.  Nipples scouted and set, and her trail included some nice woods, several main roads, some shiggy and a history lesson for the Eagles, who cut through the Dranesville Tavern.  Everyone made it in safely with no evidence of falls, mudslides etc.  There were four dogs – Cam, Abby, Kiley and Olaf.  The weather was beautiful, sunny and almost 60 degrees, and everyone was out on the deck with the fire pit lit.  There were breakfast foods including cheese eggs, ham biscuits, sausage balls, fruit salad, and a nice crumb cake (courtesy of Beef Strokemoff).  The Oral Advocate did well as Mufti Pro Tem and we had one 99 to the cup, Tim.

And Packing Pink Heat got renamed Mimosa Mary on the occasion of her 400th run.

Anyone who has photos is welcome to send them.  These are from the archives: 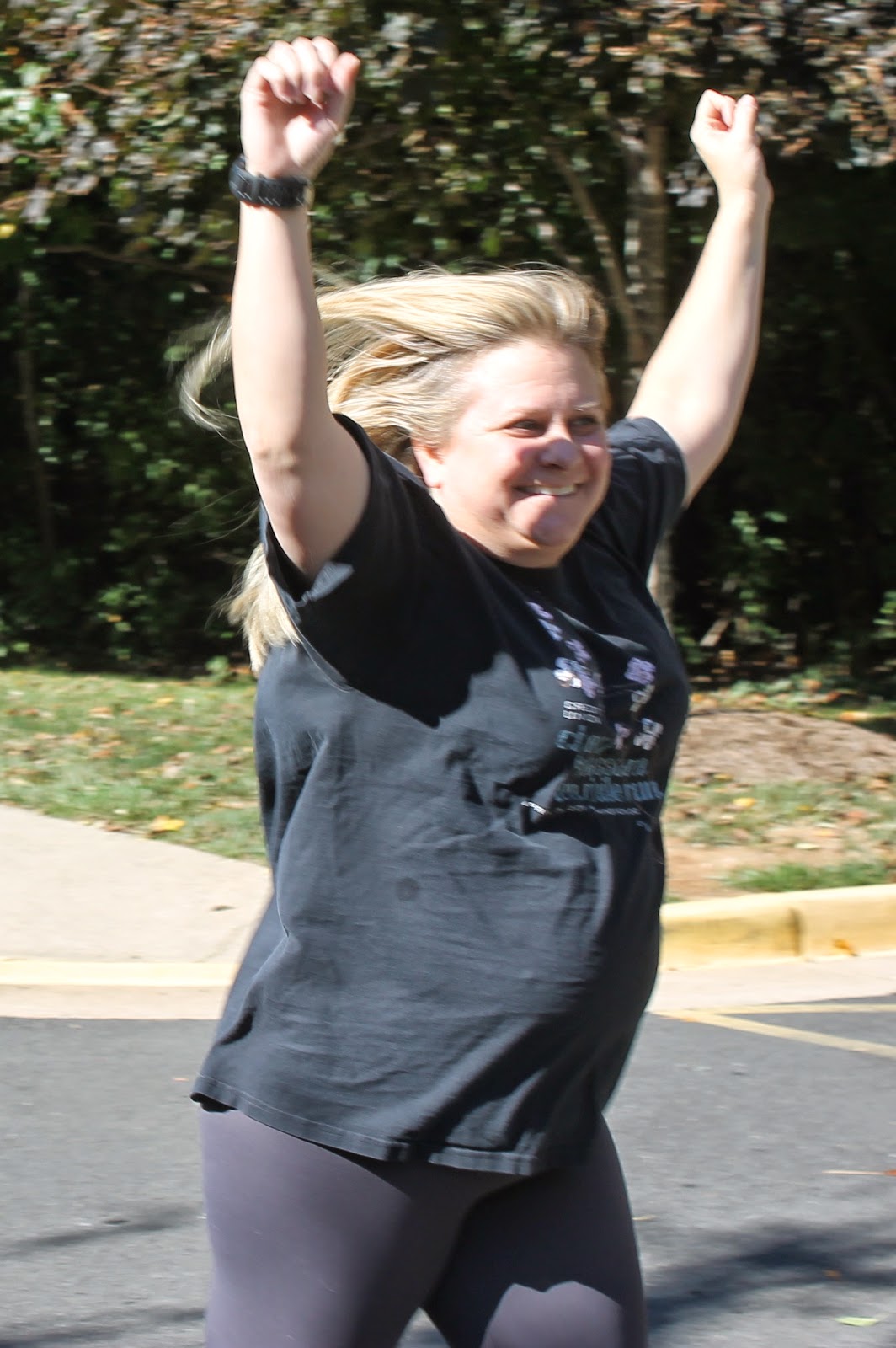 Joy to the World

Goodwill to all -- and someday, maybe, peace on earth.
Posted by Cork Me at 1:07 PM No comments:

Email ThisBlogThis!Share to TwitterShare to FacebookShare to Pinterest
Labels: joy

Blazing Straddle heroically offered up her home (yes, we were here just a month ago) for a hash, and Spurt and Blow in the Hole offered to help out with flour.  So they all got together at eight ack emma, when it was still fairly chilly, and slathered historic downtown Herndon with floury marks, and then BStrad started her pots boiling, and by noon twenty more of us had joined the heroes as the sun struggled with cloud cover and the day warmed up to downright cool.  "Enjoy downtown Herndon," was most of the brief (plus something about a possible backcheck), and the group split almost down the middle, with eleven runners heading south and then east while nine walkers followed Ole Fud toward the TRAIN!  And the bread bakery.  Let's not forget the bread bakery.


The run was mostly paved, describing a fair-sized southerly clockwise loop that crossed the W&OD twice.  Despite the presence of young whippersnapper Mike, the pack stuck pretty well together.  Or perhaps because of said presence; as Rough Cut notes, the reason we have whippersnappers is so someone else can check the falses.  Not that R.C. didn't check a few falses his own self...


Some of the walkers spent some time in the woods, fortified by Great Harvest carbs; most stuck to the asphalt.  And the TRAIN!  Everyone eventually wound up back at the house, where Mango, Oscar, Abby and Kylie gazed hopefully at the plates of noodles and meatballs.  Okay, Oscar not so much -- he doesn't do people food.  In fact, offered one of BStrad's sister's homemade Christmas cookies, he barely seemed to notice.  Silly Oscar.  Those cookies were good.

The Mufti hollered his roll, celebrating Rough Cut's 900th run with raucous cheers.  Then he bid the group a fond, "See you," as he mentally finished packing for the long drive to California.  He urged everyone to extend the same respect, courtesy and attention to Acting Mufti The Oral Advocate as we do to himself... then thought that over and suggested maybe just a hint more would be appropriate.  Phoenix Rising urged O.A. to remember the 'benevolent' part of 'benevolent dictator.'  The inter-regnum begins two days post-Christmas, either in Herndon or Ashburn.  Watch the official site, and if you like, take a gander at this week's photos, too.
Posted by Cork Me at 10:40 PM No comments:

First and foremost, congratulations to Blows and Goes for emerging hearty and well from his recent, unexpected surgery.  We look forward to his return to GFH3.


We do not look forward to the Mufti and BC3's departure at the end of the month, especially after they treated us to a another great hash today.  The Oral Advocate and Phoenix Rising chipped in to set trail, and it was an excellent one, plus the weather in Reston was decent for the time of year -- which means chilly and cloudy enough to make southern California look that much better, but not cold enough to require a third layer.


So 31 of us gathered for a mutual-admiration moment masquerading as a brief, and 16 runners headed uphill, while 10 walkers sauntered lake-wards, with multitudinous dogs in tow.  The runners broke up into three chunks of turkeys, two of eagles, and one serious shortcutter.  Almost everyone got the nice bit of shiggy that brought them back to culs de sac of Center Harbor for a zig-zag On In to THE EGGS!

BC3 had cooked up a marvelous brunch of eggs, croissants (still warm, even for the final two finishers!) and sausage.  Plus mimosas and fruit and panettone for afters, and altogether everything delicious, restorative and festive.  Gosh, it was a great meal.  Mark your calendars:  she's back in late March or early April.

Mufti roll-called, Rough Cut made 899 ("I've got to think up a new name.") and Rick made number one.  Bubbles got 'forgotten' until the Mufti started to make a fuss.  Chip Off the Old Dick bravely stepped forward, but clever Mufti saw through the ruse.  He was gracious enough to present me with CIA lotion and body mist (no, seriously -- Central Intelligence Agency skin care products) and a hand-carved nest of Christmas trees, in celebration of my retirement from the role of Assistant Associate Mufti.  Or something.  Let the record reflect that I got an entire sentence out for my speech ("I'm not even going to try to say anything.") before the hash realized what I was up to.  Ha ha!  Going out in glory!


I took a few pictures, and Queen Cobra got hold of the camera and took a boatload.  Enjoy.
Posted by Cork Me at 10:06 PM No comments:

Rough Cut Rides to the Rescue!  Hash Hero Does it Again!  Not only did he provide a warm, dry place for 18 hashers to gather, with Easy Strider for the assist he laid a well-marked four-plus mile trail around Leesburg, with enough mud and rock to keep it amusing.  Intermittent downpours made setting amusing for our hosts, until E.S. shook both fists at the firmament and shouted, "Is this the best you've got?!"  Allegedly, they were subject to nothing worse than drizzles after that.  More news from the set:  they had to stop at a grocery store and pick up additional flour.  Imagine those two showing up in your baking goods aisle, soaking wet and squeaking clay across the floor.

Seven runners essayed the course, six forwards and one backward (on purpose), and they mostly seem to have checked almost every false trail, so that Jeffy Lube claimed almost seven miles on his GPS.  Chip Off the Old Dick, exploring the mud with his usual commitment, wound up far behind the others, re-checking the falses and returning late, covered with glitter.  He claims he doesn't know where that came from, either.  One colleague guessed mica in the rocks; another guessed strip clubs just across the state line.


Over on the walkers' side, they mostly toured Leesburg, with the Mufti and Ole Fud covering over three miles, including several circuits of the train store, and barely beating the runners back.  No one got too terribly wet, though a steady drizzle ensured enthusiasm for dry socks back at the On In.  There was also considerable enthusiasm for the pizza, the Oklahoma/Oklahoma game and the Heineken.

The Mufti was of course enthusiastic over his roll call, congratulating our host on his heroics as well as his 898th run, and the former Drill Me, Fill Me, previously known as Open Wide and Swallow, on his 300th run with its concomitant new name, which is either Dr. Jaws or Jawbreaker, depending on who was shouting the loudest.  Mufti also asked, again and again, "Is anyone desperate to host next week?"  Receiving a reverberant silence in response, he invited everyone to his and BC3's place for brunch.  That's a NOON START on Saturday.

Blow in the Hole helped with the photos; thanks!
Posted by Cork Me at 1:05 AM No comments: